Music and drumming in particular, is a passion for whole my life. A passion I like to pass on to others.
I like to use and apply my extended knowledge of drum- and musicstyles in my lessons and workshops. Besides that I do gigs with different bands and projects and I’m being hired regularly for studio-recordings.

In 2004 I graduated at Alkmaar Conservatory, department Jazz & Pop. In 2005  I started drum school Sven Bakker and became a drummer and drum teacher officially accordimg to the Chamber Of Commerce. Because I wanted to play and learn more and wanted to play in wll known music-orientated cities, I did study trips to a.o. New Orleans and Los Angeles. There I deepened my knowledge in backgrounds and cultures like hiphop, funk and blues. During my musical carreer I took lots of lessons and followed masterclasses and workshops by drumguru’s like Dom Famularo,  the late Jim Chapin and funk-icon Stanton Moore.

As professional drummer I worked with well-known and less-known musicians in and outside Holland in a wide range of styles, like hiphop, jazz, latin, new orleans and hardrock in bands, theater, musicals and at cd-recordings. My own funk orientated style has because of this been influenced by styles like rock and jazz.  Watch and listen my  drumming here. 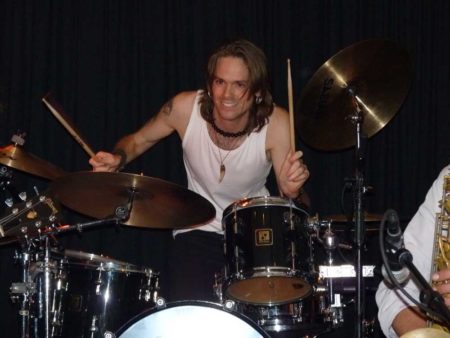 My other lifelong passion is drawing. I make graffiti’s en murals (wallpaintings), portraits, logos and flyers, paint objects and design tattoos. This passion also I like to pass on. I give graffiti workshops as part of workshops for schools. I teach drawing to children in Hoorn, as dependance of the well-known drawing academie  De Tekenacademie by Ariana Berends-Brouwer (Amsterdam/Utrecht/Rotterdam). Contact me for available days and times.

As artist and graphical designer I’m mostly self-taught and sharpened  by lessons at De Tekenacademie and Het Tekenlab. My inspiriation comes from my wide interestin art, but was mostly influenced by the first and second generation graffiti writers, the skateboard- and custom culture art, tattoo-art en underground comics. I have great admiration for graffiti artists like Dondi White, the comics and illustrations of Robert Crumb,  VC Johnson,  Peter Pontiac, the comic style of Robert van der Kroft  and work by Dutch artists like Cosh and especially Boris Tellegen a.k.a Delta. By all these and more influences, my drawing has, like my drumming, a funky style to it.

You can see a selection of my work in my portfolio, where, besides tattoo-designs, drawings and graffiti, I also show my concert photos.

Want to see more of my art?

My portfolio shows a selection of my drawings and graphical work, graffiti and concert photography.