How it all started

Many times it is stated that music or other activities and/or  interests between a certain age, among which is a part of your teenage years, make the most lasting impressions. In my case this is a mix of skateboarders, musicians and other creative people in a.o. hiphop, like B-boys and graffiti writers (to the extent that this is hiphop).
Not a strange thing….however already in the 60’s there were people skateboarding, it was not until the early 70’s that the Z-Boys team laid the foundation for modern skateboarding by riding empty pools. Graffiti was also extisting in the 60’s, but it was not until early 70’s that the first extended pieces were made on the subways in New York.
On 11th of augustus 1973 Kool DJ Herc isolated the instrumental parts of records at his blockjam at 1520 Sedgwick Avenue in the Bronx and mixed them using 2 turntables after which Coke la Rock toasted/hyped over it and with that the brought about the birth of hiphop.

Although I didn’t yet existed in the first half of the 70’s, but with every new phenomenon there are people who kind of invent something and people who are innovating it and (partly) with this giving it bigger exposure. In case of the skateboard culture as wel as the hiphop culture there were many artists who innovated and due to magazines and videos got international publicity -although not mainstream- and created something where today’s million selling industries owe lifetime credits for.
Concerning hiphop grew in what is called the Golden Era: hiphop-groups and artists added their own style/identity; there was Public Enemy who wrote engaged lyrics over aggressive beats, Eric B. and Rakim, of which the latter was influenced by John Coltrane and with this developed his more syncopated rap flow, Boogie Down Productions and others who used samples of James Brown’s grooves, Mantronix who distinguished himself with groundbreaking beat productions, a little later Gang Starr who made a link to jazz by groundbreaking DJ’ing and beatmaking of DJ Premier and the flow and lyrics
of rapper Guru and there was De La Soul who, together with other groups of the Native Tongue movement brought a “positive-mind” development in hiphop and many more amongst who was the Juice Crew and its individual members.

Exaclty during this time (elate 80’s/early 90’s) I ended my last years of elementary school and went through high school.
The fact that I was influenced by these subcultures was however not self-evident living outside of a city: where I was buzzy skateboarding, most others where playing football, where I drawned graffities and photographed the first pieces in Amsterdam, people from my class where hanging out outside with eachother and when I wore Public Enemy badges and shirts, most other boys wore their Metallica or Ironmaiden shirts and however hiphop got more exposure (Rock Steady Crew, Aerosmith/Run DMC, De La Soul), it was far from accepted to support those groups and artists.
To put it in short: I lived in what can be called as “my own world” (of magazines and videofragments), but what was the precursor of what would become not only mainstream, but also millionselling in the years after.

Het might be clear that although OOR magazine and programs of Dutch broadcasting VPRO (Fa. Onrust) paid attention to these subcultures, it was kind of magic when MTV started broadcasting Yo MTV Raps. At first it was the USA-version with Dr. Dre and Ed Lover, later the European version came with Sophie Bramly. Just home from school I was looking forward to watch the 1 hour non stop Golden Era clips in the middle of the day. One of the clips that was regularly shown was the Juice Crew clip called “The Symphony”. The video showing rapgods like Big Daddy Kane and DJ Polo in a Western setting, rapping over a bold beat with samples of Otis Redding’s  “Hard To Handle” is written in my memory. This, besides clips and songs by the individiual rappers themselves, like Big Daddy Kane’s “Smooth Operator”that I still use in my drumlessons.

It was all a dream…

Music and drawing always went had in hand with eachother and although I had the idea to make something with more hiphop-god portraits in one, the more specific idea came when I saw the Juice Crew was coming to the venue  ‘t Paard in Den Haag (The Hague). With 13 persons to be in the drawing, it was not an easy job to get in completely drawned and colored with Polychromos on a paper size 40×50 cm, but on the 7th of November 2017 I could hand it over to all te members of the Juice Crew that were standing ready and were alerted the “PictureGuy” (me) was entering. I was photographed with the members by a battalion of photographers and other people. To meet and speak to all of those hero’s from my youth and to see them walking everywhere I looked, was like a dream.Just when I collected my last signature, someone knocked on my shouder; itwas George DuBose, popphotographer who shot a lot of iconic and historical photos for just as legendary albumcovers and artists (Madonna, Ramones, Run DMC, Notorious BIG and many other hiphoppers, when they were rising to stardom. George and I know eachother for years as we bump into eachother on literally every place.
A story that not many people can relate to so much, other than my enthousiasm -as I notice-  but as I heard someone at Urban matters say: these are the Michael Jacksons and Madonna’s of the hiphop. In that case I know it immediately: we have a connection. For who still doubts about the importance and interested readers: Roxanne Roxanne, a movie about…., yes indeed, is broadcasted on Netflix now.

At this point I want to thank George DuBose Photography and  Stijn Coppens Photography (look for them!) for their beautiful photos and  ELjay Wix a.k.a #LadyUltra (still going strong, search for her!) who is one of the first female MC’s in Holland (Devastating Female Force), also eternal thanks for the short movieclip (see last part of the movie in this blog).
Ofcourse lots of thanks for the people backstage at ‘t Paard, without you guys I would have been toting this thing (and hours of work) back home! 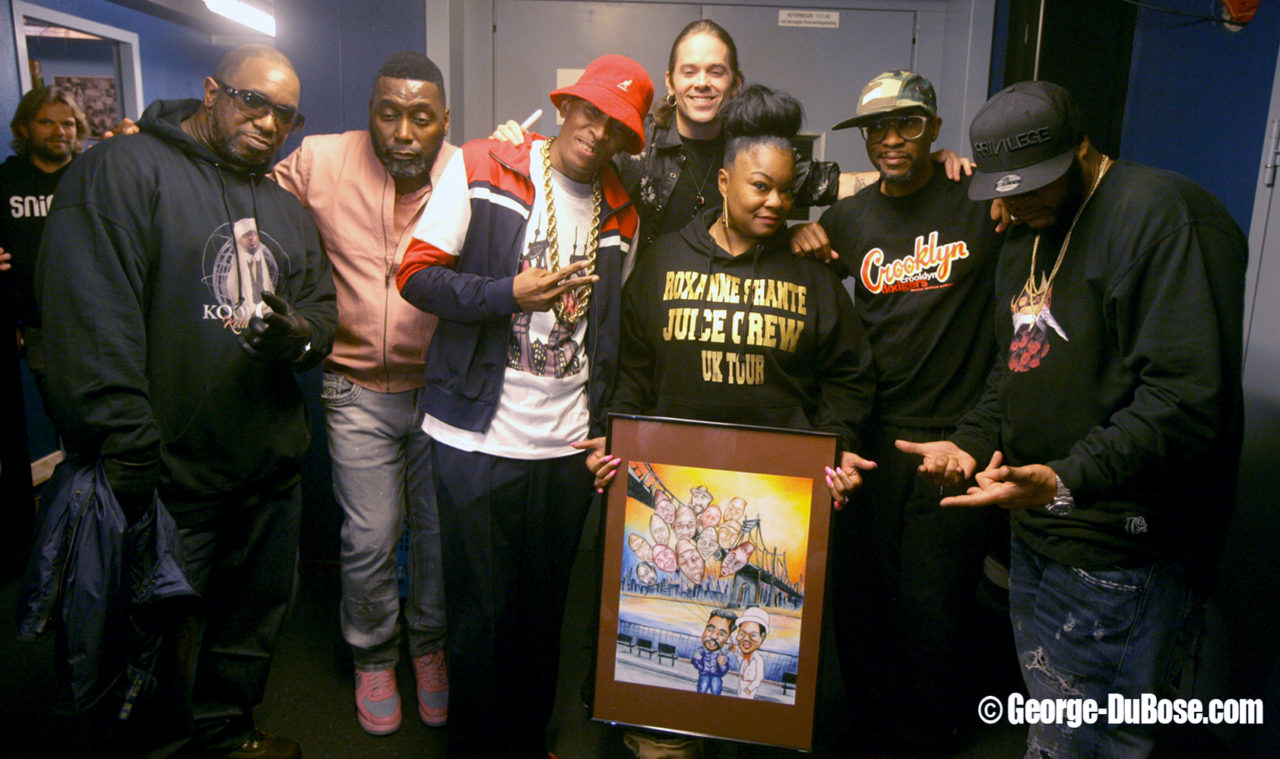